Our Caribbean cruise began at 0639 on November 11, 2015. Delphinus crossed over the Chesapeake Bay Bridge-Tunnel, passed Cape Henry lighthouses and entered the Atlantic Ocean for the 1400 mile sail to the British Virgin Islands. On board was Captain Pete and crew: Ron Fox, James Dylewski and Bob Alexander. We were in the company of 32 other sailboats participating in the World Cruising Club’s (WCC) Caribbean 1500 and ARC Bahamas rallies.

We encountered some interesting weather along the way – winds varying from 6 to 50 knots, seas as high as 12 feet and waves coming from two or three directions at the same time. Delphinus and her crew handled these conditions very well, sailing at common speeds of seven to eight knots, with spurts at 10 to 13 knots.

Some items needed repair, but none that affected seaworthiness. We had a continuing problem with the port engine eating starter motors two day out. So the starboard engine was the primary propulsion in light winds. We will focus on electrical issues and potential hydrolock issues with the port engine when we return after Thanksgiving at home.

We did enjoy some recreation during the trip. We fished quite often but due to our sailing speeds we didn’t have much luck. We caught a small (less than three pounds) false Albacore that we threw back. We lost a sizeable Mahi as we were landing it – but he bit through the leader and was free before we could gaff him. On the next to last day at sea we caught a 15 pound Mahi that provided two wonderful meals for the crew. 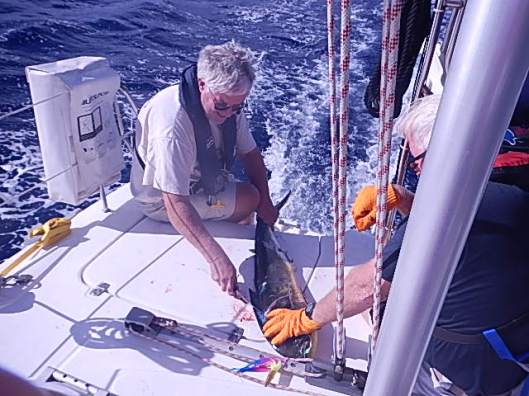 We encountered several large ships along the way. Our closest approach was less than half a mile from a tanker heading to Spain. It’s common to have boats pass within 20 miles or so. We can see their Automatic Identification System (AIS) identifiers on our chart plotter, and we pay a lot of attention to the closest point of approach (CPA) to avoid getting too close. 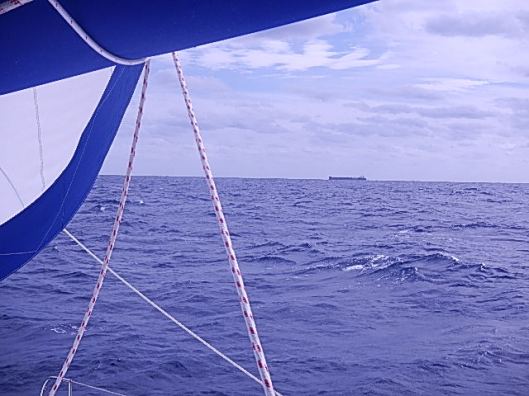 A Tanker at Sea

The trip took 8 1/2 days to complete, ending just before midnight on November 19, 2015 in Nanny Cay Marina on Tortola, BVI. We were greeted by the WCC staff and provided with celebratory rum punches after getting Delphinus tied up. The crew picture below (from left to right): Captain Pete, Bob Alexander (Seaford, VA), Ron Fox (Yorktown, VA) and James Dylewski (Erie, PA). 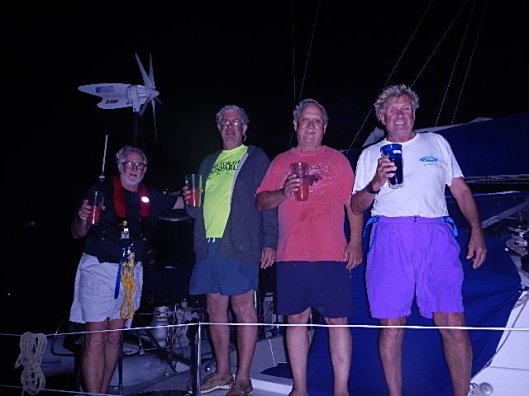 Below is the tracker showing the course we traveled. Our course didn’t follow the rhumb line (the red line) due to winds. Our course is the lighter line. To ensure we got closer to BVI we sailed on a beam reach as we encountered the east trade winds that start about 300 miles north of the Virgin Islands. 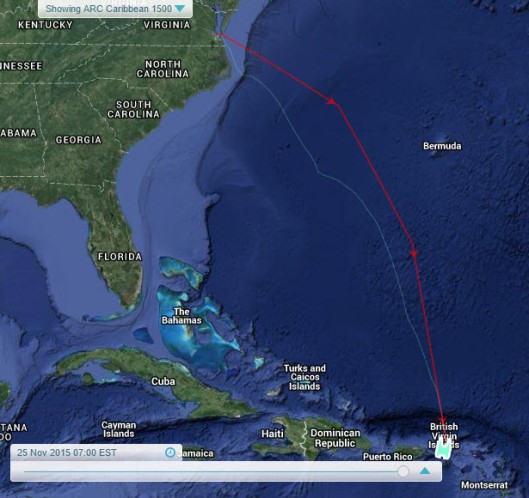 The morning after arriving we enjoyed breakfast at the marina restaurant – eggs, bacon, omelets, brewed coffee, etc. The first order of business after breakfast was rinsing and washing Delphinus to remove the crusted salt (yes, salt crystals do build up) from the deck and rigging. Getting showers at the marina and a relaxing afternoon of small chores followed.

Friday evening we enjoyed a happy hour sponsored by the WCC and dinner with crews of other boats. Many stories about weather, equipment, breakdowns, fishing and meals were shared and enjoyed. There were boats from Great Britain, Canada, Belgium and New Zealand participating in the rally. New friendships were made and old ones refreshed. 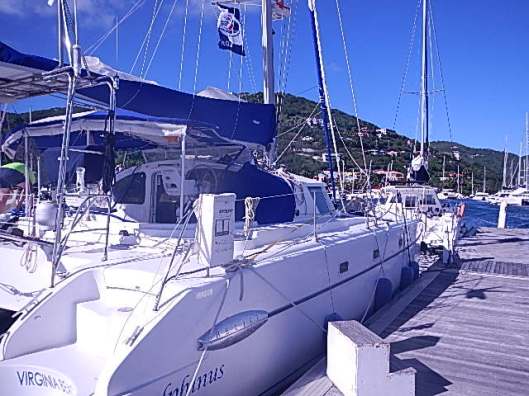 On Saturday morning we left Nanny Cay for a quick stop at St. Johns Island, US Virgin Islands to check in with US Customs. Our next stop was American Yacht Harbor Marina in Red Hook Bay on St. Thomas, USVI, where we left Delphinus and Pete returned home for Thanksgiving.

While in Red Hook, Pete noticed a boat that we had chartered 10 years ago – Clewless. This boat was our first family charter vacation with both kids. It was a memorable family vacation that we still enjoy reminiscing about.

Stay tuned and stay in touch!