We’ve had a busy few weeks since our last post and put a lot of nautical miles under the keel – some of the sailing delightful and some not so much.

We spent quite a bit of time in Prickly Bay, but decided to move to Secret Harbour because we hadn’t been there before. It is a small bay tucked into the southern coast of Grenada. There were not as many boats here as in Prickly Bay, but a nice marina and restaurant. Pictured below is the view from the upper level bar.

We stayed in Grenada for their Independence Day celebration. One of the local bus drivers, Shade Man, organized a trip for cruisers to attend the formal Independence Day military parade in the national stadium. It’s not obvious in the pictures below but nearly everyone in attendance were decked out in bright combinations of red, green and yellow, the national colors.

The ceremonies were full of pomp and circumstance. The parade units included the military special forces, coast guard, police, police band, youth cadets, girl guides and boy scouts. The local politicians gave speeches and inspected each unit. The police band played throughout, but gave their best show when they got to march. Their band leader danced and pranced around the field to the crowd’s delight. 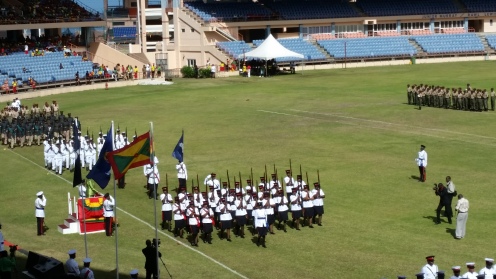 After the parade, Shade Man took us all to a small local rum shop for Oil Down, Grenada’s national dish. The story goes that it was a mainstay in the slaves’ diets during plantation days. It is made with salt fish, chicken, breadfruit, callalloo, dumplings, coconut milk and whatever other vegetables and meats are on hand.

After lunch, Shade Man stopped at a favorite cruisers spot, Nimrods, for rum punches. Like our lunch stop, it is a tiny wooden structure on the side of the road with only a few seats inside and some benches and picnic tables outside. A very nice way to end a fun day.

One of the highlights of our stay in Grenada was an island tour given by a taxi driver named, Cutty. He is know throughout the cruiser community for giving one of the best and most entertaining tours. We had booked our tour and unfortunately Pete had been trying to get some electrical work done. The electrician couldn’t make it on the committed day, but was available on the day of the tour. We opted for me to go alone while Pete stayed on board Delphinus to wait for the electrician.

Cutty’s tour did not disappoint. There were eight of us in his taxi and he started the day by asking what everyone wanted to see and do. One of the biggest highlights for me was when he would suddenly pull over to the side of the road and take leaves and/or fruit from trees and pass it around the taxi for us to smell or taste. The first taste of the day was pigeon peas right off the vine. Throughout the day we tasted all kinds of things, including the apple like fruit that grows below the cashew nut. One of the things I found amazing was that he would go into people’s yards to pick these things and no one said a word. It is accepted that these fruits are available to all. Cutty said that no one in Grenada should go to bed hungry as so much is available to pick along the roads.

The modern history of the island includes a coup in 1983 followed by the US invasion. As I understand it, most Grenadians see the US action as a liberation. Below is an ad hoc tribute to America’s actions.

In addition to touring some of the beautiful spots in the rain-forest and along the coastlines, we visited a rum distillery that still makes rum as it was made over 100 years ago. We also visited a small chocolate factory that hand makes and wraps each bar. The samples were delicious! 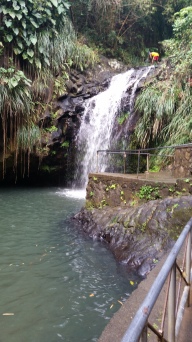 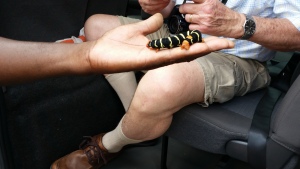 With all of the work completed, we were now ready to begin our journey north. We had been debating for some time whether or not to sell our current dinghy, which is large, heavy and has limited space, and to buy a new dinghy. 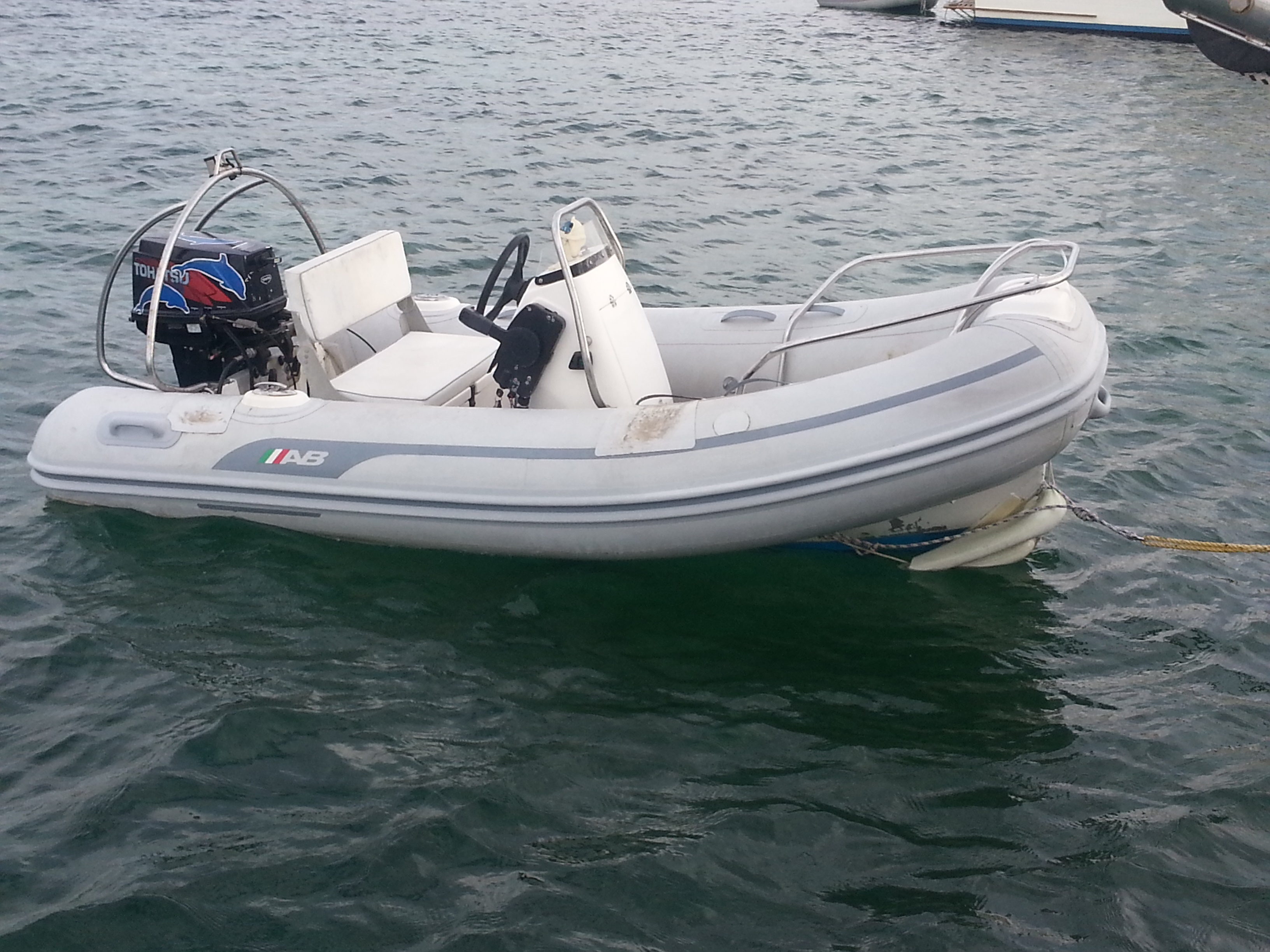 Pete put out some feelers with people we’ve met on the island and on the day before we planned to leave we got a call that someone wanted to see the dinghy. They looked at it, liked it and made an offer. We scrambled to ensure the dinghy and engine we wanted were in stock at the local Island Water World and were assured both were there.

The next day, Sunday, we sold the dinghy and moved Delphinus to a marina in St. George’s since we now had no way to get off the boat while at anchor. First thing Monday morning Pete went to Island Water World anticipating purchasing the dinghy, engine and various accessories. When they showed him the dinghy it turned out not to be the one we wanted – just one digit off on the stock number caused the confusion. They had one of the specific model we wanted, but it was marked sold.

What followed were several phone calls to Island Water World in Grenada and in St. Lucia. St. Lucia confirmed they had the dinghy we wanted, but did not have the engine. Grenada had the engine, so we bought the engine in Grenada and strapped it to the table legs in the cockpit.

Our original plan was to spend about two weeks in Carriacou and Bequia on our way to St. Lucia. Without a dinghy, this was no longer practical so we planned one night stays on both islands to get to St. Lucia and the new dinghy.

We spent one night each in Carriacou and Bequia and left before first light to make St. Lucia before dark that evening. While crossing between Bequia and St. Vincent, which is open to winds and waves from the Atlantic, we had winds of 30 to 35 knots and 6 to 7 foot waves with short period (close together) so we bounced our way along, feeling quite beat up by the time we got through it. I was reminded that this is what happens when you have a schedule. If we didn’t need to move we would have waited an extra day for a better sail. The pictures below show rain clouds that came over the top of St Vincent while we were underway. The weather projection for the crossing from St. Vincent to St. Lucia  was 10-15 knots from ESE. Not anywhere near that: 20 to 25 knots NE and 6 to 7 foot waves again. We were headed NE of course. The good news is we made it safe and sound into the marina in Rodney Bay, St. Lucia in late afternoon.

After showers and dinner on shore, we both got a good night’s sleep. The next morning, after clearing customs, Pete was at Island Water World to purchase the new dinghy. They got it set up, attached the engine (which had been riding in the cockpit) and launched her.

We ended up spending another week in St. Lucia to take care of more maintenance items and provisioning. There we caught up with Ian and Joy from s/v Reberth, whom we met when we were both recommissioning our boats in Grenada Marine and staying at La Sagesse in January.

While we were still in Grenada, Pete made some modification in our cabin (extra lighting, power and fan) so I can have a dedicated sewing space. While we were at the dock in St. Lucia I managed to finish this quilt top. I’ve enjoyed the space to set up and work.

Although we didn’t explore much of St. Lucia this time, we did enjoy our stay. On our way into the marina we saw Gregory (the man who sells produce from his small boat). See the small boat (blue top) in the first photo below. He found us in our slip and visited us everyday to sell us produce from his mother’s garden – or so he says.

We are now in Martinique, anchored off the town of St. Anne. We had a delightful sail here in 15 to 20 knot winds, we have already taken advantage of the French food and wine, and caught up with new friends we met in Grenada who are on s/v Brilliant (Carl and Carrie) and s/v Nancy Lu (Mark and Kathy). Baguettes and croissants abound! This week is “Carnaval” which is the island version of Mardi Gras with daily parades and celebrations. More on that and our other explorations in my next post. “Au Revoir.”

Stay tuned and stay in touch!